Do you see the profile face above?  What is he looking at? 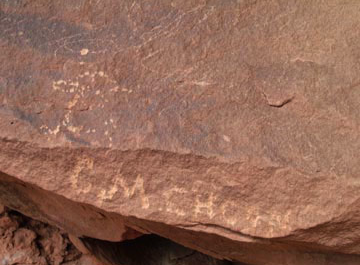 Chcon and the Spanish Treasure Depository

No part of this book may be reproduced or transmitted in any form or by any means, electronic or mechanical, including photocopying, recording or by any information storage and retrieval system without written permission from the author, except for the inclusion of brief quotations in review.

Dedication
Dreamers become explorers and explorers discover. It is to those Dreamers this book is dedicated.

We now have proof that hundreds of years before the accounting of Columbus the King of Spain sent forth Spanish explorers, engineers and miners into the incredibly wild and beautiful country known to them as the Americas. Their goal, simply to claim the land, concur and convert the indigenous people.  Claiming the land was first and foremost on their agenda as Spain had been struggling for years on the verge of bankruptcy.  This virgin territory with it’s vast untouched deposits of gold, silver, and copper were highly sought after not only by Spain but other countries.
The cost for exploration was great and many groups met their demise during skirmishes with the indigenous natives or other natural disasters along the way.  These catastrophies caused the King of Spain to require these explorers to document their routes to established mines and treasure depositories in two ways.  First the map maker would draw up hand written maps that would be returned to Spain.  Secondly all routes to and from these sites would have monuments and trail markers erected along the whole route.  The land maps were largely created by enhancing natural and unnatural rock formations to resemble people or animals of many types along the trail.  The trail map makers expended massive amounts of time and energy to construct the monuments in order to   comply with the King’s dictates.  Certain monuments were used to relay a particular message and most monuments were enhanced  with secret carved codes that enabled those with the knowledge of their meaning to locate and follow any given trail marker to the final destination.
During the three year war between the United States and Mexico from 1846 until 1849, virtually hundreds of working mines and some treasure depository sites within the US’s borders were closed up and hidden.  The most valuable sites were also death trapped.  The Spanish intended to return someday and the death traps were in place to maim and kill anyone who happened to locate any of these valuable holdings.  The Spanish never were able to reclaim these holdings and and there are virtually thousands of hidden sites all over  the United States and Mexico.  Due to the  extreme measures taken to hide these sites, very few have been located by any others to date.
With the release in recent years of incredibly reliable information, a few of these valuable mines and treasure sites have been located.  This story is based on a true event.  It has been written to be both entertaining and enlightening.

Chcon and the Spanish Treasure Depository
Chapter One

"Lost Treasures You Can Find in Colorado" Book is available at "Dewitt Enterprises" to order call Bob DeWitt @ (719) 473-0330 or email request to:    books@dewittenterprises.com

I love to hear from my readers and I'm happy to help anyway I can.  Take the best possible photograph of any signs or formations you need help with and send your questions to me directly Here.

Recommend this page on: